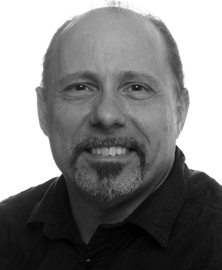 Lars Bröndum, PhD, is a composer, performer of live-electronics, theorist and guitarist. His music has been performed in Sweden, Japan, Scotland, Lithuania, Latvia, England, USA, Spain and Mexico and has been broadcast on radio and webradio in Germany, England, Sweden and USA.

His music often explores the interaction between acoustic and electronic instruments and lives on the border between written music and improvisation. The compositions are structured around cyclical processes, irregular ostinatos, fragmented gestures and microtonal clusters.

Lars performs live using an analog modular system, a Theremin, effect pedals and sometimes a laptop with Max/MSP. Bröndum often composes for (and plays with) the ensembles ReSurge, INEA, SFW and As Good As it Gets (a duo with Sten-Olof Hellström). He has received composer grants from Konstnärsnämnden (Swedish Art Council), STIM (Swedish Performing Rights Society) and awards from FST (Swedish Composer´s Society). Bröndum is the founder of the independent record label MuArk.

Lars is an active composer at EMS (Electroacoustic Music in Sweden) and was on the Board of Fylkingen (new music & inter media art society), SEAMS (Society of Electroacoustic Music in Sweden), and was Chairman in VEMS (Composers at EMS) 2007-2008.  He has served as a board member on the Swedish Section of ICEM (International Confederation for Electronic Music). In 1992 Bröndum finished his PhD in Composition & Theory at the University of Pittsburgh.

The dissertation is entitled “Formations for Chamber Orchestra” and “An Analytical Study of Voice Leading and Pitch Class Set Structure in György Ligeti’s Kammerkonzert Für 13 Instrumentalisten”. “Formations for Chamber Orchestra” is an original composition and the analytical part proposes a model for analyzing cluster music by  combining set theory and linear analysis. Lars also has a Masters in Music in Composition and Music Theory (1989) and a Bachelors of Music degree in Guitar Performance (1987) from the Dana School of Music at the Youngstown State University. Lars is currently a Lector (assoc. prof) in Music at Skövde University.

Some selected recent projects are: (for full list se http://www.brondum.se/MuArk/Concerts.html)

2015
Feb 26        "Frequency Code" premiered at Shimokitazawa "Apollo" in Tokyo,
Feb 28        "Vertical Structures" premiered at Suidobashi "Ftarri" in Tokyo,
This project involved composing and performing music by Bröndum as well as improvisational work with together with Japanese musician Tetuzi Akiyama. This project was in part made possible with a grant from Svensk Musik

2014
Oct 25       Premiere of "Twittering Machine #2" in Moscow, Russia at the Moskovskiy Dom Kompozitorov by the Moscow Quartet.
The project was funded in part by Svensk Musik and involved the four Swedish composers: Lars Bröndum, Jamie Fawcus, Paulina Sundin, Yolva Q Arkvik and the Moscow Quartet. The project started in Stockholm with workshops and rehearsals and finished up with the concert in Moscow.

"Where Do We Go From Here?" presented at the IASPM Norden conference Oslo, December 4, 2014. The paper discusses post digital survival techniques of music creators.

CDs (available on Spotify and iTunes

A collection of works by Lars Bröndum. In a review by Dagens Nyheter the cd received 4 (on a scale from 0 – 5 - where 5 is the highest grade)

"Kept in the Dark" by AS GOOD AS IT GETS (released by schhh records - schhh.se). The cd was nominated by the Manifest Award in the Experimental Music Category. It was also nominated by the periodical "Nutida Musik. As Good As it Gets is a live electroacoustic music duo consisting of Lars Bröndum & Sten-Olof Hellström.  http://www.records.schhh.se/index.html

Where Do We Go From Here?: The Future of Composers in the Post-Digital Era