Being an exchange student in Skövde – feels like a nice dream

Trinidad Sánchez Montoya came to Skövde as an exchange student for half a year. After one semester she decided to extend her stay in Sweden and continue to study at the University of Skövde. – It has felt like an unbelievably nice dream. The most difficult thing has been to properly shut down the curtains to avoid being woken up by the super early sunrise when summer is close now, she says. 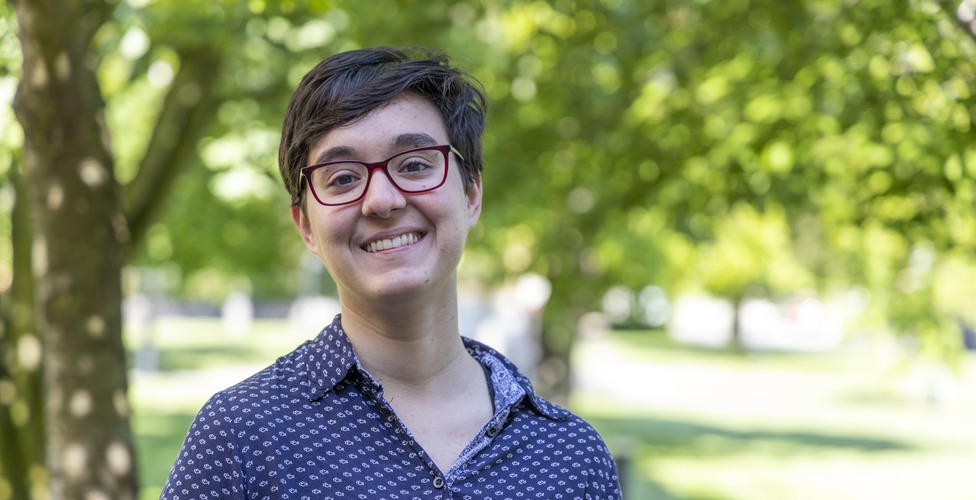 Trinidad Sánchez Montoya grew up in Almeria, a small beach town in the south of Spain. Windy and sunny days are the norm and on the farms in the area tomatoes and peppers are grown.

Trinidad looked into the opportunities to study abroad for a semester as an exchange student.

– Once I know I wanted to study in Sweden I chose the University of Skövde. It was one of the Erasmus options at my home university and I had some classmates that had previously studied here and really liked it.

Was not ready to leave Sweden

But one semester was not enough for Trinidad who extended her stay in Sweden to a whole year.

– Several factors like my studies, the people and the country influenced my decision to stay. Most of the factors were also in some way affected by the pandemic.

During this second semester at the University of Skövde, Trinidad Sánchez Montoya is completing the Intelligent Automation Master´s degree, while also finishing her Master´s degree in Industrial Engineering from her home university online.

– I was supposed to go back to finish my Master´s in Malaga, but I changed my plans and am now doing it online. I came to Sweden from a country where, as most countries, lockdowns had been going on and off for months and you could only be outside for a few hours a day. The idea of having to go back to this uncertainty and restrictions did not seem appealing. Here the landscape, the lakes, hiking paths, the snow during winter, the birds, flowers, and the changes in daylight - it all felt so new and exciting to watch and experience that I did not want to miss the end of winter, the spring and summer. Even being able to grocery shop on Sundays contributed to my decision to stay.

Another factor is the people. She describes the excitement of making new friends in the beginning of her first semester when there was still teaching on campus.

– I wanted to maintain these connections for another semester. Probably, so closely after being alone during lockdown, it felt a bit overwhelming having to say goodbye so soon to the people I had just met and to whom I had been able to bond with so quickly.

She also mentions that the different way of teaching at Swedish and Spanish universities had an impact on her decision and explains how tasks and final exams are evaluated differently.

– At my home university, as in many others, finals exams have the complete saying on whether you pass or fail a subject. Experiencing a different way of evaluation at the University of Skövde, where assignments play an actual role in your grades, took so much pressure off my studies that I did not want to go back to that stressful student life at my home university. Studies have always been stressful, but since the pandemic started, focusing on studying has become a bit more difficult, and having the opportunity of studying somewhere that motivates and relaxes you, is extra great.

How would you summarise your time in Sweden, Skövde so far?

– It has been a great experience. I have learned a lot, met really cool people, discovered surprising places, and had so much fun. It has felt like an unbelievably nice dream.

What do you think you are doing in five years’ time?

– It will be, hopefully, around the time when I finish my PhD and start to decide what to do next. At this point, I do not know yet what that would be. I have no clue as to where I will be living, but I know that I want to come back to Sweden at some point and, if it cannot be in five years, it can always be in ten.