Karoline Forsberg grew up in Stockholm. But her studies in game development took her to Skövde, and then out into the world. She has worked in the USA, Sweden, England and Iceland, where she is currently working on the game Eve Online. Had the right job and opportunity appeared, she could have imagined moving back to Skövde, if only her partner wanted to come along. 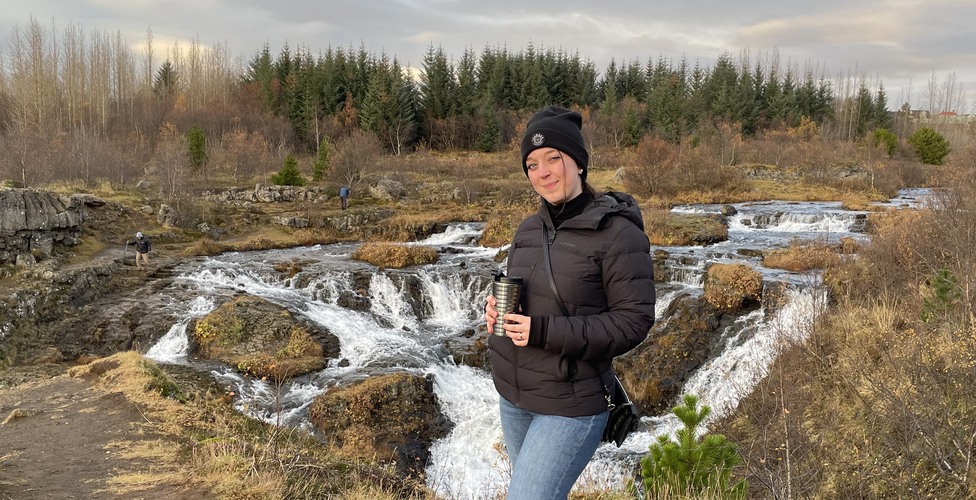 Karoline Forsberg moved to Skövde from her hometown Stockholm to study game development at the University of Skövde. She did not really know what it meant to study game design, but was sure she wanted to work with games, so she took the chance.

“I thought that if I were to realise that I did not like working with games, I would at least have an education in computer science. Some people who want to work with games vocational educations, but I felt that this would give me more opportunities.”

Why did you choose the design specialisation?

I have always liked games and created my own board games. When I was little and could not read rulebooks, I invented my own rules. As I got older, a friend and I used to modify existing games, such as chess, so that it was faster to play. I've always been fascinated by games and thought it would be fun to create that kind of medium.

Karoline thought that the first year of the education was quite difficult. The courses contained many different things and there were some thresholds to overcome. But it was also now that she began to understand more what game development meant.

“Before, I thought you come up with an idea and the game just happens. I had not thought so much about the process of taking an idea to a product. I started to see the connection between design, programming, graphics and sound, and see how much work it was. I understood that it was an extreme effort to make games, and that all the different roles were needed.”

What was most exciting about the education?

“It included some psychology, and we also looked at UX (user experience). We had to think about who the user is and how you should do to get the user to stick to what you create. It was super exciting. I also thought the game project courses were very educational. To try to make a real game, where we got to use the knowledge we had learned. Most of it was fun and exciting, even if it was difficult.”

How was it to study in Skövde?

“Skövde is a super cozy student city and I loved studying in Skövde! Everything was so close. You do not need a car, you can manage by walking everywhere. I got a bike after a while but it was more of a luxury. It was also easy to hang out with the friends I made in Skövde. We did not have to plan so much, which was a big difference from Stockholm. There were also always people on the University campus, so you knew that there was always someone there to hang out with. It was such an active student life and there are so many opportunities to get to know people. There will probably be better cohesion in a smaller city. I only have positive experiences and can really recommend people to apply to Skövde.”

After graduating, Karoline got an internship at a mobile gaming company in California. The internship was unpaid but she saw it as a chance to learn more about the industry. When she later turned her attention to Sweden again, she started working as an IT Technician at Ericsson, a job she got thanks to her degree in computer science. After a while, she changed jobs, to Game Designer at Pixel Tales, which in 2015 became Star Stable Entertainment. There, she then became a Lead Designer and stayed for five years before she felt she wanted to try something new. She moved to England and started working at the studio nDreams, with the VR game Fracked.

Today she is a Senior Game Designer at the company CCP in Reykjavik in Iceland. There, she works with creating content and gameplay for Eve Online, one of the world's largest MMORPGs. But she not only works with it, she also plays it.

What do you have with you from the education?

“It's probably more than I think. One thing I think was good is that I got to see so many different sides of game development. We got a holistic perspective. I also felt that the University gave me the tools to develop games – it was then up to me what I did with them. The university does not sit and make sure that you use the tools – it is up to you to create your portfolio in the direction you want. That is probably the difference between a vocational education and an academic education. And I thought it was good.”

What would you say to someone who is considering studying Game Design?

“Go for it! If you want to work with games and feel that it is design that suits you, then you should invest. I think it is a very fun job and an exciting industry to be in. In addition, the gaming industry is growing a lot and we are in need of more knowledgeable people.”

“Move back? Absolutely! It's probably my partner who does not want to. He is from another part of Sweden and would probably rather move there if we move back to Sweden. But I would not have minded if there was the right job and the right opportunity.”

Read more about the University of Skövde's educations in Game Development