Students made computer game for girls with autism and ADHD

In a course at the Master´s Programme Serious Games, at the University of Skövde, the task is to develop a game in collaboration with a customer. Seven students have now ensured that the book character Alma, a girl with autism and ADHD, has stepped into the world of computer games. 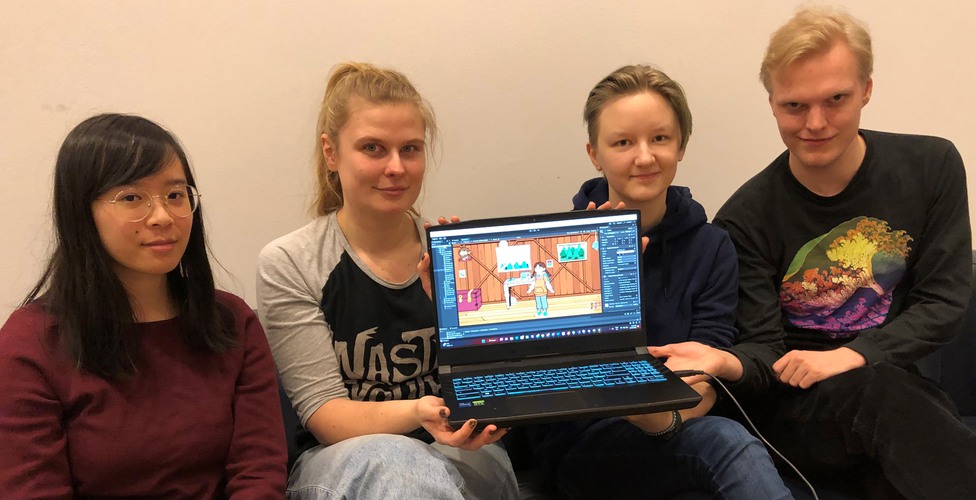 The task is, for the master´s students, to develop a prototype for a computer game based on the wishes of a customer.

“Customers came to the University and presented their problems/assignments and what they wanted help with,” explains Deborah Carlander, who studies the two-year Master's Programme.

One of those who turned to the University of Skövde for help with developing a game prototype was Kristina Collén, author and lecturer at Örebro University. She is the creator of the character Alma and with her books she wants to focus on girls with different special needs. With the character Alma, or more the Alma model, Collén wants to make this group of girls visible, and Alma already exists as lectures and theatre performances. Now the idea was a computer game and that with the help of students at the University of Skövde.

“We were seven students who really got hooked on making a game around Alma and Kristina gave us free rein. She really wants to lift up girls with autism and ADHD, as it is a group that is often forgotten. But it is also a group that usually plays various computer games,” says Lovisa Malinen, two-year Master's student.

The game is based on the book “Alma and the Parrot Mystery”.

“I did my Master's thesis in the form of a mobile game aimed at women with high-functioning autism, so it sounded very interesting to me to be able to continue developing within that topic. I have read a lot of research on autism and was able to contribute it to the group, while we all read more to gain an even greater understanding of both autism and ADHD,” says Deborah Carlander.

The students have now developed a game where the main character Alma solves various riddles in her uncle's boathouse. She has to both figure out and cope with different things to get to the next room and it can be anything from solving a puzzle to finding a hat.

“Many people with autism and ADHD have good pattern vision, so we have thought about that with the puzzles, while at the same time we know that there is a high sensitivity to sound and we have also illustrated this for other players.”

Initially, the target group was girls with autism and ADHD aged 7–12 years, but after the playtest it was clear that it was even better suited for 9–13-year olds.

“It was incredibly exciting to attend when the game was tested and it went really well. It was so fun to see and hear the girl’s comments. We asked a girl if she recognized herself in the character Alma and she answered: I am Alma.”

The students state that it has been intensive work for eight weeks. They have all contributed with different skills from animation, design and programming to writing the narrative.

“What we take with us from this course is above all what it is like to work on assignments and how to handle a theme and turn it into a game. It clearly brings other aspects and also working towards a younger target group,” says Milla Nilsson and Gustav Frick, who are both studying the one-year Master's Programme.

Now the game has been tested and a prototype handed over to the customer. Through the students at the University of Skövde, the book character Alma has stepped into the world of computer games.