The Swedish Minister for Culture learned about games in Skövde

On Thursday 21 October, Sweden’s Minister for Culture, Amanda Lind, visited the University of Skövde. The visit was part of a visit to the Skaraborg region, and in Skövde, games were on the agenda. 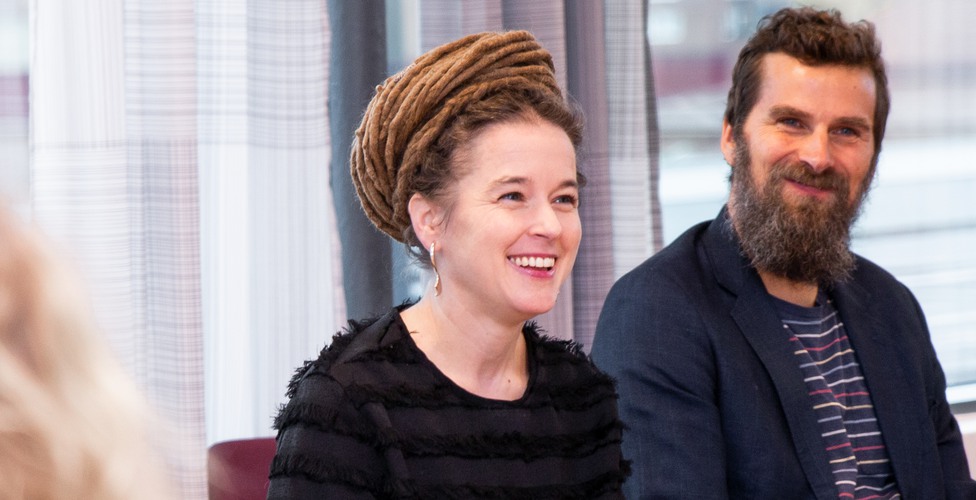 Sweden’s Minister for Culture, Amanda Lind and Johan Örnemar, who hosted the Minister's visit in Skaraborg.

The Swedish Minister for Culture and Democracy, Amanda Lind, was on a major visit to the region on Thursday 21 October. She came to the University of Skövde immediately after a visit to Skara skolscen (theatre education), and in Skövde, the focus was on game development and games as a cultural form.

Participating during the visit was Vice-Chancellor Lars Niklasson, who greeted everyone welcome and presented the University's activities. Per Backlund, Professor of Informatics, Louise Persson, Lecturer in Media Arts, Aesthetics and Narration and Emil Forslund, Lecturer in Informatics, then told more about the educations in game development. Louise and Emil especially focused on why gaming is culture.

“There is a strong connection between established cultural forms and computer games. Almost all specialisations in our game development educations are counted as individual cultural forms, but "games" are not. Games and playing have always existed in human culture. We discover and explore the world through play and games. Games are culture. We just hope that more people will realise it,“ said Louise Persson.

“It is fantastic,” the Minister for Culture agreed.

“We are many smaller companies in Skövde, and we know that we are stronger together. We also have good contact with other game development clusters in Sweden and we have good exchanges between us. But we in Skövde are the ones who have come the furthest today - we are called Sweden Game Arena for a reason,” said Tau Petersson.

Through Gustav Rosberg at Flamebait Games, the game companies in Skövde were also represented. Flamebait was founded by five students from the University, all of whom remain in the company today. They are behind the global success Passpartout: The Starving Artist, where you play as an artist and paint paintings in the game.

“Many who study game development here move to Skövde, and it becomes very dynamic when everyone comes from different places. We have our company in Skövde and have good contact with other companies. It is a very good environment for us here,” Gustav Rosberg explained.

Jenny Brusk, Senior Lecturer in Computer Science at the University, Innovation Advisor and Business Coach at Science Park Skövde, had the last point and spoke about inclusive education and inclusive industry. She also told about the DONNA network and the DONNA Day event.

The visit ended with a conversation, where the more political parts were discussed. Among other things, it was touched on that the University has collaborated with several different cultural actors, to broaden what games are and how they can be experienced.

“It is difficult to regulate from a political point of view what different organisations do and who they cooperate with. But we must be open to new ideas. One way to broaden the view of games is to show all the different experiences games can provide. There is something that appeals to all people,” concluded Minister for Culture Amanda Lind.