Human-robot collaboration – it may sound like science fiction, but it has now become a reality. Patrik Gustavsson is a research student at the University of Skövde, and has developed a virtual reality environment in which it is possible to test how well a human-robot collaboration would work with regard to different assembly tasks. 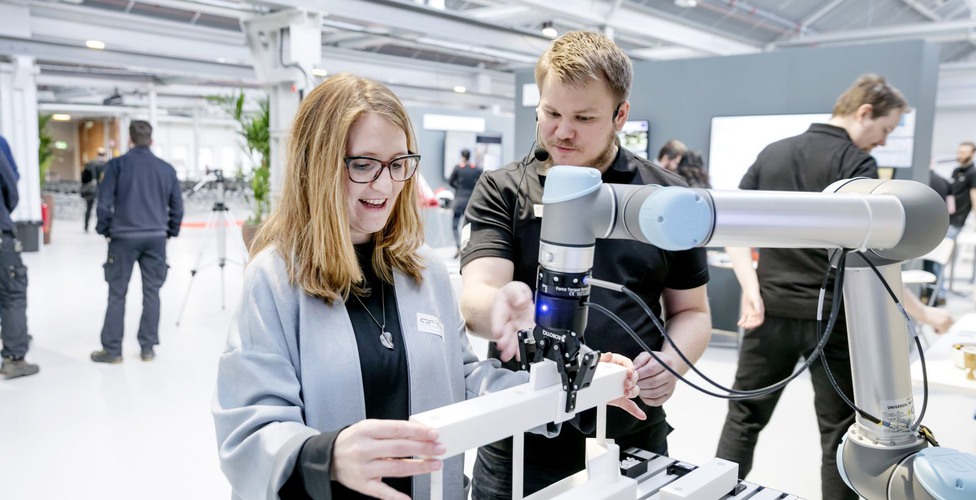 We stand at the threshold of the fourth industrial revolution, where smart factories are necessary in order to meet customers’ demands for increased volumes and individualised products. In these smart factories, the use of robots will be an important element in meeting the requirements of variable production.

By allowing robots and humans to work together in the same working cell, they can collaborate in such a way that is mutually beneficial. The robots can perform tasks that require heavy lifting, repetitive movements and high levels of precision, while the humans can focus on tasks that require intelligence, flexibility and adaptability. Today’s robots, however, are often large in size, and it is not uncommon that they pose a danger to people working within the same area.

Patrik Gustavsson is a doctoral student at the School of Engineering Science at the University of Skövde, and has conducted research into how humans and robots can interact with each other.

– Industrial robots are currently used for a range of different processes within the manufacturing industry, and are often placed behind safety barriers as they can pose a hazard for people working nearby. Instead, we would like to use so-called collaborative robots, which are able to work more safely in close proximity to a person, says Patrik Gustavsson.

To achieve improved interaction and communication, Patrik Gustavsson has, for example, used speech recognition and AR (Augmented Reality), and has tested leading the robot by the hand.

– If a robot and a person can collaborate and interact well, the production process will be able to benefit from both parties’ skills, explains Patrik Gustavsson.

The research has particularly focused on assembly tasks, and Patrik Gustavsson has identified three factors that have considerably restricted the application of human-robot collaboration within this field. This usually involves:

Patrik Gustavsson has now developed a virtual reality environment, which a person can enter in order to collaborate with a robot. This makes it possible to test new applications without compromising human safety.

– I hope to be able to continue the development of this virtual reality environment so that industry will be able to make maximum use of it. We will also be launching a research project where we can apply this virtual environment to engineering tools that are currently in use in industry. We hope to be able to identify ways in which we can improve the work processes for those who work with this type of technology, says Patrik Gustavsson.