Sweden Game Conference catched Lisa Kolfjords interest regarding Skövde’s growing game development community. After her studies at the University of Skövde, she began the journey to start her own game company, which led her to Iron Gate Studio and Valheim. "We went from having over 5,000 members on Discord to over 100,000 in a month" says Lisa Kolfjord, Community Manager at Iron Gate Studio. 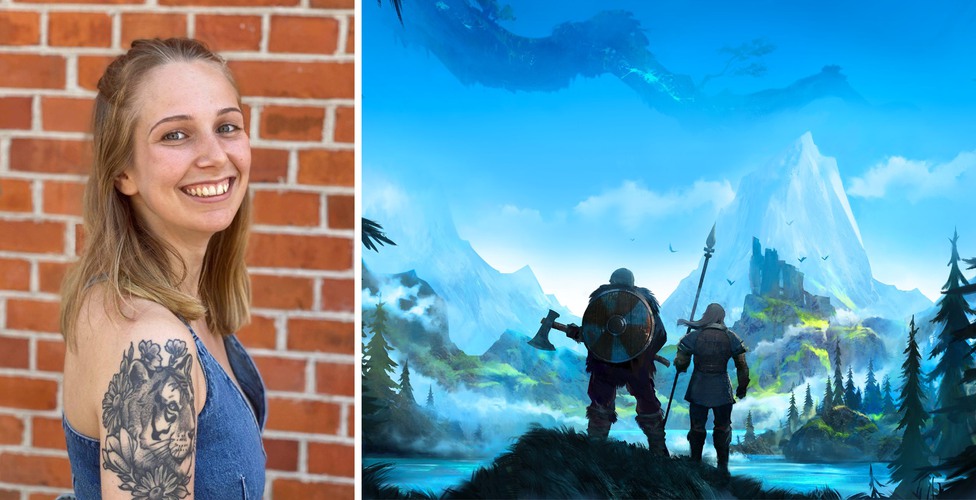 Lisa Kolfjord grew up in Malmö in southern Sweden, and has had an interest in games since an early age. At the age of 14, she started calling herself a gamer and became involved in different communities. During high school, the interest in working with game development grew after a friend started studying game design.

It wasn’t obvious at first that she would start studying animation at the University of Skövde. It was when David Gaider, Narrative Designer and Writer, and a person who Lisa looked up to, announced on Twitter that he would speak at Sweden Game Conference in 2016 that she visited Skövde for the first time.

"I bought tickets to Sweden Game Conference and went there to listen to David. At the conference, I met game development students from the University of Skövde. They told me about the programmes and Skövde as a city, which made me go home and read more about the university. That's how it became obvious to me that I was going to start studying animation there" says Lisa.

Experience for a lifetime

The possibility of starting your own business through Science Park Skövde's startup programme was something that Lisa and two of her classmates talked about six months before it became a reality.

"It was a very good startup programme, and the coaches did their best based on the situation with the pandemic. Having been part of the startup programme gave me experience that I will take with me for a long time to come.”

While Lisa was on the startup programme, she was searching for a part-time job. That's how she got in touch with Iron Gate Studio. But instead of a part-time job, she was offered a full-time position as Community Manager.

"I don't regret that today, given the journey Iron Gate Studio have been through" she says.

A few months later, it was time to release Valheim in Early Access on Steam. The response from the players was massive. In the first month, more than 5 million copies were sold and positive reviews poured in.

"We had over 5,000 community members before we released Valheim and expected it to double. After a month, we had more than 100,000 members, which meant some overtime for me in the first few weeks".

Today they have over 185,000 members on Discord and are constantly trying to interact with the players.

"During Easter we had a competition where they got to paint Easter eggs with a Valheim theme, which was appreciated," says Lisa.

Valheim has sold more than 6 million copies and Lisa is constantly impressed by the creativity among the players when it comes to the bases built in the game.

The team at Iron Gate Studio will grow, at the same time as several updates are coming up.

"The next step is a major content update, which is what we are working on right now. Then there are other updates that we're working on, such as new areas and bosses. We are also reviewing job applications that have recieved, so the team will expand soon" Lisa concludes.