From Russia via Skövde to Berlin for former Global Swede winner 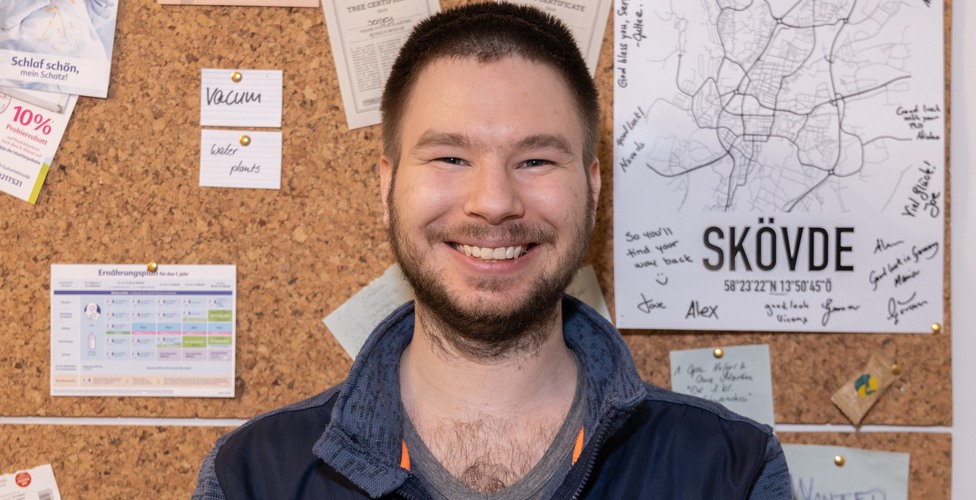 Sergey Rudyuk is from Russia and before going to the University of Skövde he studied Information Systems and Technologies at the Moscow Engineering and Physics Institute.

– During 2016-2018 I studied Data Science in Skövde and in my second year I also worked part-time as a research- and teaching assistant for Skövde Artificial Intelligence Lab, SAIL.

In 2018 Sergey Rudyuk became the University of Skövde´s Global Swede. The annual recognition of Global Swede is a joint initiative by the Ministry of Foreign Affairs and the Swedish Institute. The award is, annually, given to international top students at Swedish universities.

– The ceremony at the Swedish Ministry of Foreign Affairs in Stockholm was quite rewarding. It brought together Award-winners from all over the country as well as many government employees. It was a perfect opportunity for networking. Finding out that, in many questions, we think alike was a huge point of reassurance and a great motivation boost, says Sergey Redyuk.

Why did you choose to study at the University of Skövde?

– Back in 2016, my reasons was mainly pragmatic – at that time, in Russia, there were only a few Data Science Master´s programmes, all of them were quite new and still "beta-testing" their curriculum. I was looking for a well-balanced program and a scholarship grant, as I could not cover for a European education by myself. Both the MSc Program in Data Science at the University of Skövde and the Swedish Institute's scholarships were the solution for me.

From Skövde to Berlin

For the last three years Sergey Redyuk has been living in Berlin and he has continued to study.

– I am a Ph.D. student at the HEIBRIDS graduate school that focuses on interdisciplinary data science, working at the Database Systems and Information Management Group of TU Berlin. I continue studying several niche topics that data science has to offer.

How would you summarise your time in Skövde and Sweden?

– Rich in opportunities! Especially, when it comes to intercultural communication. In a 50-student dormitory, you could easily find people from at least 20 different countries. In this environment, you learn a lot, you learn fast, you learn a vast variety of opinions. Among the countries that I have been lucky to visit, Sweden has my top-overall score for a country to live in. In Skövde, I found everything that I needed and wanted for quite a comfortable life - the size of the city, nature, the university and communities. And I have to say I miss Skövde a lot for its nature and the reach-all-by-foot size. The only drawback was that you need to spend two to three hours to get to an international airport, but you get used to it as well.

It is simply awesome to live abroad

What did it mean to you to study and live in a foreign country?

– From the beginning, it meant coping with challenges - language, mentality, being way out of your comfort zone 90 percent of the time, your family and friends are away, your head is about to explode from new material and exercises. Two months after, you just adapt, your comfort zone is wider, and all these huge challenges are not that huge anymore. Here I want to mention two things. First, I recommend everybody to try living abroad for a while - that is simply awesome! Secondly, if you do try, Skövde might be a very attractive place for many - it was for me.

From Russia, to Sweden and now you are living in Germany. What do you think you are doing in five years’ time?

– Usually, I am rather hesitant to answer questions like this. Maybe that's part of my Russian mentality. One thing I am quite certain about is that, in five years, my son will be preparing to go to school so I'll be doing lots of "fathering", to the best of my abilities.