Already from a young age Leire Amenabar Echave knew she was going to study engineering. She began her studies in Spain and concluded them by studying at the University of Skövde. Her final project gave her employment at a Swedish company and she is now both living and working in Skövde. 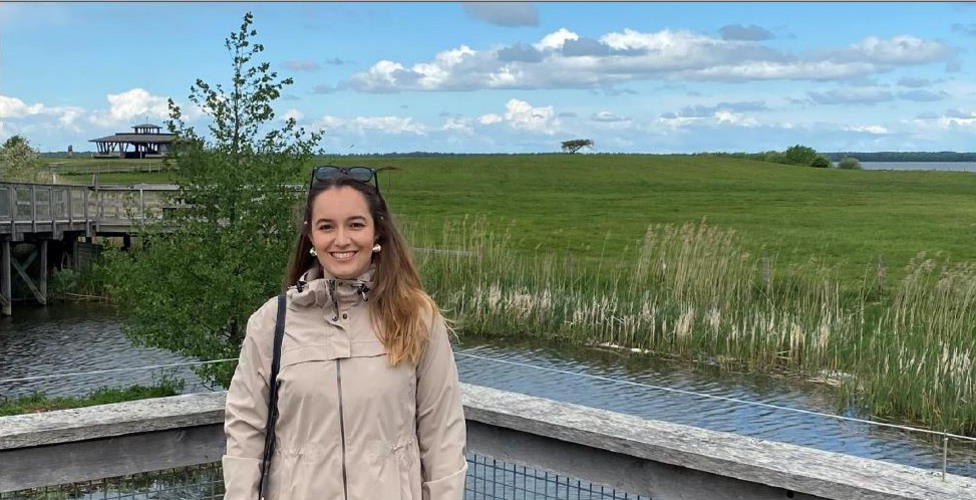 Leire Amenabar Echave grew up in a small town in the north part of Spain and after high school she continued to university. In her fourth year of university she took part in the Erasmus exchange student program and came to Sweden to the University of Skövde to study Automation Engineering.

I looked at different universities in Sweden, Poland and in the Netherlands but realized that the University of Skövde had a really good rating. Furthermore, I know that education in general has a high standard in Sweden, so I choose to study here. I very much enjoyed that we only had two courses at the same time and then had an exam. In Spain, the system is totally different, you study many courses at the same time and instead have final exams at the end of each semester.

During her studies, Leire lived in a student housing and made new friends from all over the world.

– Being an exchange student makes you grow a lot as a person – I used to be very shy but living with people from other countries made me open myself. Moving to a new country was a cultural shock in the beginning but it was and is a live changing experience. Do not be afraid of making mistakes – just go for it.

After she finished her Bachelor´s engineering studies both in Sweden and back home in Spain, Leire moved to Barcelona and decided to do a Master´s in Control Automatics and Robotics. The last six months of the Master's education was a final project and Leire once again, looked at the possibilities to study abroad. She applied to do her project as a trainee in a company in another country, and she returned to Skövde.

– I did my final year project at Elektroautomatik, which is the largest automation integrator in Sweden and it's located in Skövde. After the project, the company offered me a testing period of six months as an Automation Engineer but with focus on industrial vision systems. During this period, I also started working on several other projects for bigger companies such as Volvo Cars, Volvo Powertrain and Scania.

Working as an engineer in Skövde

However, in January 2021, Leire was offered a permanent employment contract from the company in Skövde.

– Since then, I have worked as an Automation Engineer focused on industrial vision systems. Apart from this, I am responsible for the Innovation section of the company. In the beginning we spoke English, but now all the meetings are in Swedish and I do know many work-related words in Swedish. Everyone is very kind and I noticed that the younger people, often, find it easier to speak English. Now, I have been learning the language for one year and a half in SFI (Swedish for immigrants). Apart from that, I practice it both at work and at home since I have a Swedish boyfriend and friends.

More about the Universities Engineering programmes and courses