After working a couple of years René Locher from Switzerland decided to go back to university. This time he wanted to study abroad and chose the programme Data Science at the University of Skövde. During his final project he had a successful cooperation with a Swedish steel company. It was so successful that the company is now using the program René developed, and also offered him a job. 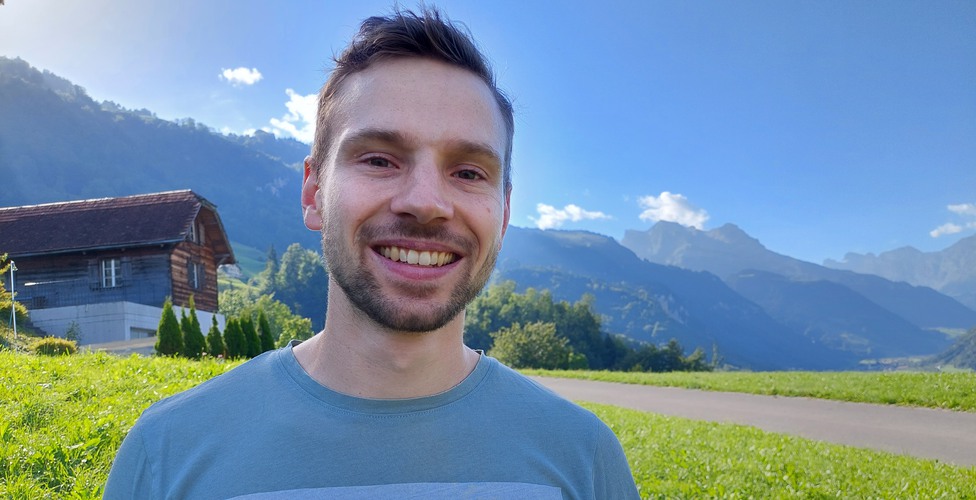 In Switzerland, René Locher studied a Bachelor of Electronics and during his studies he went abroad to Mexico. Back home, in a village near Zurich, he worked for nearly four years as an electronic engineer and then wanted to continue his studies.

“I wanted to broaden my horizon and ended up studying Data Science at the University of Skövde. I am interested in Data Science and AI, and I was curious to see what is behind the words. There are also many jobs that include programming,” he says.

René Locher knew he wanted to study abroad again. He had been to Stockholm once and decided to go back to Sweden, but this time as a student.

“I was looking for a year’s study, a Master´s Programme, in Data Science as I wanted to do something completely different and experience studying abroad again. So, I wanted to both study as well as feel free from work obligations for a year, but also take a break from my training and work at a sports club.  I am a gymnast and teach gymnastics four days a week at a club.”

René Locher knew there was a final project at the Mater´s Programme in Skövde, but not that it would be possible to do it in cooperation with a company.

“In Switzerland, it is normal to do your project with a company, but I did not know how it was in Sweden. I hoped for it as it is a great experience to try to understand the customer’s problem and it also gives you a smooth entrance to the industry.”

During his final project René had a successful cooperation with the Swedish international steel company Ovako. The data program René constructed managed to read the serial numbers on 91 percentage of the steel bars compared to the program the company previously had bought which only managed to reach 33 percentage.

“They had a practical problem, and I could solve that as I managed to find another technical solution in how to read the serial numbers on the bars.”

The company has been integrating René’s system and have just started using it.

“They will use it and I have been working with them during the summer, helping implementing it. I was offered a job by Ovako, but it was never my goal to live in Sweden and it would be hard working with them from here for a longer time. But of course, I helped them getting started.”

“We are very pleased with René and the work he has done. We have the traditional knowledge of machines and material needed in the steel industry, but we definitely need more knowledge when it comes to new technologies with AI, tools for analysis and digitisation. We learn a lot and really appreciate new competence from the students. The steel industry is very traditional, so we need a new kind of engineers who have this type of competence.”

“It means a lot to us to have this cooperation with the University of Skövde.”

Students from all over the world in Skövde

Even though René decided to move back to Switzerland he will shortly start working for a Swedish company, but in Switzerland.

“Yes, I got a job as an Electronic Engineer for ABB. I am pretty sure I need my knowledge from Data Science there as well, there are always things that need to be solved by data science. “

Can you say something about studying at your university in Switzerland compared to studying at the University of Skövde?

“My university back home is even smaller than the University of Skövde and far less international with only three international students. In Skövde you meet students from all over the world and I really enjoyed living in a student dorm. It is always nice to spend time with other students as you meet new cultures and we often cooked dinner together. When being a student again I enjoyed having more free time and I began climbing during my time Skövde. I bought the equipment and I will continue climbing back home.”

Do you have any advice for students considering studying abroad for some time?